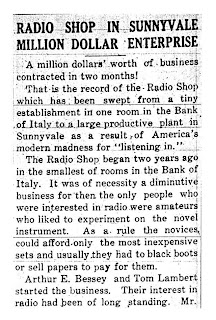 Here is a 1922 newspaper article about THE RADIO SHOP from the Sunnyvale Public Library's archives. The report dovetails nicely with oral histories from 'Shop employees Joseph D. Cappa and Pete Zarko. An extra byline at the end confuses me: Was the story actually written by the San Jose Mercury Herald [News] and picked up by the Sunnyvale Standard? The full text follows below.

Anyway, work on the video continues: Shots around Sunnyvale, save a helicoper shoot, are done; I'm working on tags and Johan Koning is working on getting stock and County images.

Sunnyvale Standard, May 5, 1922; apparently adapted or aided by reporting from the San Jose Mercury Herald.

A million dollars' worth of business contracted in two months!

That is the record of the Radio Shop which has been swept from a tiny establishment in one room in the Bank of Italy to a large productive plant in Sunnyvale as a result of American's modern madness for "listening in".

The Radio Shop began two years ago in the smallest of rooms in the Bank of Italy. It was of necessity a diminutive business for then the only people who were interested in radio were amateurs who liked to experiment on the novel instrument. As a rule the novices could afford only the most inexpensive sets and usually they had to black boots or sell papers to pay for them.

Arthur E. Bessey and Tom Lambert started the business. Their interest in radio had been of long standing. Mr. Bessey became interested in the possibilities of radio many years ago when, with his father, he was connected with an incubator business in Sunnyvale. He played with radio as a hobby and dreamed that some day the rest of the world would be interested in it too. Mr. Lambert has been seriously interested in radio since 1917 when he was a wireless operator on a merchant marine.

When Mr. Bessey and Mr. Lambert decided to open their little business two years ago they applied to the government for a license to construct the sets. They were the first people on the Pacific coast to obtain such a license and now there is only one other concern with a permit to make the outfits in California. Construction of radio sets involves a great many copyrighted processes which makes it difficult to secure licenses.

Before they established their plant in Sunnyvale, the Radio Shop was located on San Fernando street [in San Jose]. The owners moved into this place when they found the room in the Bank of Italy building too small. They were located here about two months ago when the world suddenly became radio crazy. Orders came pouring in into the little shop so rapidly that it was necessary to look for larger quarters. They found a site in Sunnyvale and work was begun immediately on a well arranged plant. The building that has been put up in the last six weeks is 220 feet long and is planned so as to turn out the sets with the utmost efficiency. The main offices are in the front of the building. Here there is also a broadcasting set which is one of the most powerful on the coast. It has been heard as far east as Chicago, nearly 3000 miles.

Every part that goes into the intricate machine is made in the plant. The raw materials are received at one end of the long building. Skilled workmen convert the materials into the various parts needed for the machine. As the parts are made they are passed down to the other end of the room where they are assembled, so that when they have reached the far end of the building the machine is complete. The assembling room is large and lighted with numerous well placed windows.

The plant is not yet complete, but when full operations are started about 200 men will be employed. The owners say that they expect to turn out 150 radio sets a day as soon as their building is competed. They have contracted over a million dollars' worth of business in the last two months and are not taking any more orders for a year. Their machines are sold through distributors in San Francisco.

"Radio has come to stay," Mr. Lambert says. "Through its powers messages are transmitted all over the country with lighting like rapidity. The government realizes the importance of the thing in sending messages and announcements. Through radio machines weather reports which are vitally important to the farmers, may be received. Market reports are sent through the little instruments and important messages are transmitted.

"The most popular use of the radio is in receiving music. Radio sets are an advantage over talking machines in that the best music may be heard first hand. It will not replace the talking machine for there are always favorite tunes that people will want at a time when they are not being sent over the radio. America is dancing to radio music. This is done by placing amplifiers on the instruments so that it is loud enough to be heard blocks away if people want it."

Programs have been arranged so that those who possess radio sets may know where they can receive music at practically every hour of the day and night. At present all sending stations are working on a program so that only one thing is being sent at a time. When the thing becomes more popular and more than one feature is being sent at the same time, the operator can tune in to a certain key which will shut out all other sounds but the one in which the receiver is particularly interested.

Complete church services are being sent out every Sunday over radio now. A person may stay at home with a perfectly clear conscience, for he can worship on the back porch comfortable in his morning clothes and hear the best sermons and music to be had. This is a splendid thing for people who have not been able to go to church for many years on account of illness and infirmity.