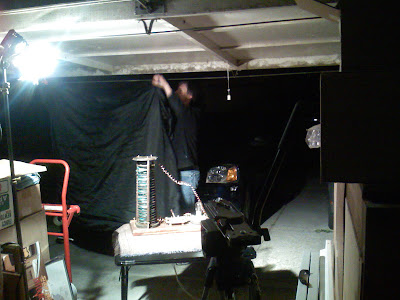 Dave Lyons shot this picture of us setting up (and his hand starred in) a little 12-second sequence stressing that it was the development of radio which turned electricity into electronics, and thus powered the magic of the 20th century and beyond.

We show a Voltaic Pile and an iPhone. Would you believe as many as 4 lights, all little, all with "snoots" (long snouts to precisely limit the light)? And thankfully the iPhone has a brightness adjustment.

This is typical of the little holes I'm filling in day by day: Woz, Atari, Lockheed, flying over 101 in a helicoper, Sunnyvale Standard, Hallicrafters, Ohlone, the sequence above. All script holes being filled in all over the place, mostly backstory context.

Work on Sunnyvale's Heritage Park Museum has progressed to the Landscaping and Interior Build-Out phase, which means soon I can stop taking daily photos and create the time-lapse sequence.

The difficult items that I continue to "procrastinate" on: a tricky street sign shot and the radio power-up shoot, until I get the "simple" things all done. I'm told I "better" have something by April :-) and I'm racing as fast as I can for music and intro handoff. About 6 holes filed in the last 2 weeks, about 14 to go.
Posted by Ben Koning at 12:00 AM